BADIOU’S REDUCTIONS (5): the suture of the psyche to the Lacanian subject 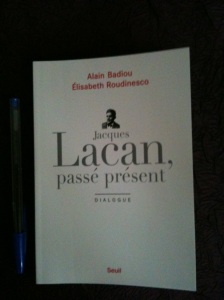 « Recently, in France, we have seen a proliferation of very violent, and particularly inept, attacks against psychoanalysis. These attacks represent a general danger for intellectuality » (p103, my translation).

The main target of this grandiose declaration is Michel Onfray’s book « Le crépuscule d’une idole » « The Twilight of an Idol », published in 2010, which contains a sustained critique of Freud’s version of psychoanalysis and of the fallacious legends about his life and work promulgated first by Freud himself and then by his followers. The book is teeming with arguments and documentation, but its reception by the French intelligentsia was generally hostile: sweeping condemnation combined with character assassination. Elisabeth Roudinesco, the co-author of this dialogue on Lacan, was very outspoken in her denunciation of Onfray and his book, but preferred insult to argument.

Badiou himself, as his book on Deleuze shows, is not so good on argument. Deleuze and Guattari’s ANTI-OEDIPUS was published in 1972, is it to be included in the violent but inept attacks on psychoanalysis? is it to be condemned as a danger to intellectuality? Badiou thought so in 1976 when he reduced the message of ANTI-OEDIPUS to « flow like pus ». The « intellectuality » of that pusillanimous pamphlet, entitled « The Flux and the Party », hardly leaps to the eye.

Badiou does not like process, flow and proliferation, and much prefers points (of decision) and tenacity (his « fidelity »). He makes a timid gesture in his account of love: « by love I mean the amorous process itself such that the « two » is intrinsically at stake therein » (L’ENTRETIEN DE BRUXELLES, Les Temps Modernes, 526, p15). In this text, published in 1990, Badiou talks about love as a process, the singular promotion and institution of the Two, and claims that nothing much has been said about it, « I am convinced that it concerns almost a new object, that must be constituted » (p16). NB: everything that Badiou likes is « (almost) a new object ». All talk of mutiplicities recedes into the background here, in favour of the Two. Intrapsychic plurality with its numerous sub-personalities, the embeddedness of the loving subjects in multiple assemblages, the existence of what Critchley calls « loving communities », all this disappears in the name of a platitudinous abstraction.

Badiou’s involuntary humour (1): His article « On Contemporary Obscurantism » is not a tearful self-critique of his own ponderous pontificating prose but an attack on Michel Onfray for daring to criticise Freud… to add to the obscurity, Onfray is nowhere mentioned by name.

Badiou’s involuntary humour (2): His article « Attacks on Freud or Philosophizing with a Bulldozer » does mention Onfray, it still has no arguments in reply to those of Onfray, but is signed by… Badiou, Balibar, Michel Déguy, and Jean-Luc Nancy. The only bulldozer one can see here is the one driven by the magisterial foursome.

Badiou’s involuntary humour (3): Camus pleases because he gives a solemn and dignified pose to great platitudes », discussing a new book… on Camus by, you guessed it, Michel Onfray.

Badiou’s involuntary humour (4): « I was never really impressed by Camus. From my childhood I was too Sartrean for that ».

Badiou’s Involuntary Humour (5): Monist Pluralism. « The only ontology faithful to the Multiple is the mathematics of the pure Multiple »

2 commentaires pour BADIOU’S REDUCTIONS (5): the suture of the psyche to the Lacanian subject